Chefs and cooks are constantly trying to improve on recipes, rearrange them, present dishes in a way no one has before. We try to be different to the other cooks and stand out.   Yet sometimes it is the simple things that are eye catching and loved by the people who are eating it.

Pavlova is one of the easiest puddings to make. You can do so much with what is essentially egg whites and sugar. Small delicate individual plates or a big crowd pleaser. I made this last weekend for a BBQ:

The email of thanks I received a week later was as simple as the dish itself. It simply said.  “The Pavlova was magnificent” . That is the best praise anyone can hope for.

Last week I had the joy of teaching for a day at Let’s Cook Scotland in Abernethy. A wonderful location. It is a small independently run school by the talented Sarah Mellersh .

I was asked to teach 3 lovely women who were all there doing a two week cooking course. They had different reasons for learning more about cooking, were enthusiastic about food and wanted to learn as much as they could.

Sea Bass pan fried and En papiotte with 3 different sauces. Lemon Beurre blanc, white wine and Thyme, and brown butter and caper sauce. The former is one of my favourites, so quick and easy. You can find the recipe on my website. 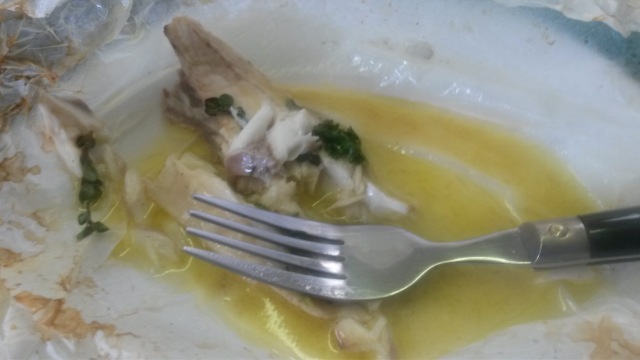 Mussels with white wine, shallots and parsley and a French country loaf to mop up the juices. 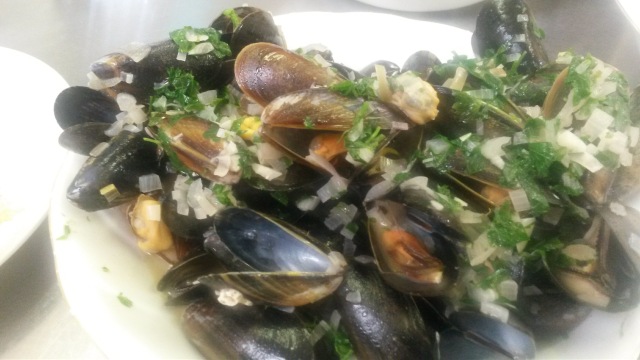 Langoustine ( boiled in salty water) . Simple and delicious. ( eaten too quick for a photo.)

It was a day of good food, good techniques, laughter and learning. What else could you ask for ?

If you want to learn a few new cooking skills and techniques have a look at http://www.letscookscotland.co.uk . A great place, great atmosphere and lovely small classes. If you are looking something more personal , I offered a bespoke service so plaease get in touch.

Saturday night and a 50th Birthday party in the wonderful Studio 93 in the West end of Glasgow. A colourful and spring like menu of Sticky Pork Salad with mango and cucumber and an Asian dressing:

Pickled cucumbers and beetroot with flatbreads.

Devoured and enjoyed in this wonderful kitchen .

With Hugh and Jemima hard at work.

Followed by desserts of Lemon Possets and Banoffee pies.

I am lucky enough to cook many things and for many different people. This has to be one of my favourites though. When clients  require Lobster, they eat it in all its simple glory  lightly boiled with homemade mayonnaise, bread and salad. But why waste the rest? From this:

To this smooth, delicious and everything in between bowl of joy:

The perks of cooking in wonderful places where fresh seafood is at your fingertips. Happy Clients, happy me.

It has been 3 months since I managed to write anything on here, or even update my website, but that has been because I have been busy teaching and cooking. This weekend I cooked for the most lovely wedding in Perthshire, for a family originally form the Isle of Jura where I am from and what a joy of a day it was.

The menu was requested by the groom, he wanted simple but delicious and I hope that is what he got.

They started with canapes – which are on the website but served on Jura slate ( made by Lesley Lockett @ http://www.slated.org.uk)

The highlight of the night for most of the well oiled boys was the Macaroni cheese pies, served in the evening with ketchup. What is there not to love?!

Last time I updated this blog, I wrote about the teaching I do with kids with The Burrow Family Club. http://www.burrowfamilyclub.com . As I said then I cook and teach for many different events and occasions. Yesterday I cooked lunch for St Patricks day for the wonderful people of Whitespace Design Agency in Edinburgh.

I was asked for a simple lunch, for 80. Of course it had involve Guiness and Soda Bread.A little bit of a cliche maybe but I had some fun. Potato and Guiness soup, Cheese and Thyme soda bread, Plain soda bread and Chilli and spring onion soda bead ( recipe on the website) To finish off I laid out bowls of chopped herbs, crispy pancetta, chilli flakes and grated cheese . I had some very happy customers. Nothing like a hint of Guiness in a soup at lunchtime to keep everyone happy. 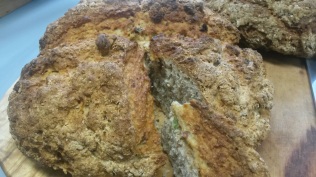 In between recreating the Great Eliza Leslie recipes, I do many forms of cooking. I cook for nutritional purposes, I do office lunches , I cook for dinner parties and I also teach. I taught at The Edinburgh School of Wine for 3 years and I have trained in teaching adults, but for the moment I am teaching 2-5 year olds’ ( and their mothers) for  a course with http://www.theburrowfamilyclub.com. I started this week and I am teaching a 5 week course over a few mornings and afternoons. Food is so important to understand from a young age as is the basics of cooking. It can also be a really fun afternoon for those with small kids on a rainy day, and from what I can gather small children love to eat anything that they have been involved in making.

This Week the children at the Burrow Club and I have been making Scotch eggs – simply and messily, along with little Apple Moneybags. I am amazed I managed to hold their attention, but its amazing what fun it can be to wrap a boiled egg in sausage meat, dip it in milk and cover in breadcrumbs.

It also makes for a fun birthday party…… Next week we begin again….

One of the things about old cook books I find most interesting is the writing. As cooks we are used to reading recipes with ingredients and measures listed, methods  with bullet points to make trying recipes quick and simple. Old recipe books are written in prose, so until you have read the whole way through you really have no idea of what it is  you are making let alone how it is done. While reading Miss Leslie’s book I started reading a recipe for Maryland biscuits. Reading through it sounded  all fairly standard, flour, salt, lard and warm milk. I then read how it needed to be kneaded and pounded with a rolling pin for 2-3 hours. This is then followed by possibly the best paragraph I have ever read in a cookery book:

This is the most laborious of cakes, and also the most unwholesome, even when made in the best manner. We do not recommend it; but there is no accounting for tastes. Children should not eat these biscuits- nor grown persons either, if they can get any other sort of bread.

When living in town where there are bakers there is no excuse for making Maryland biscuits. Believe nobody that says they are not unwholesome. ( Miss Leslie’s new cookery book).

I love this lady and I shall take her advice, once I have given them a try….

A couple of years ago, I found out that my great-great-great Aunt was a famous American cook called Eliza Leslie (though she was better known as Miss Leslie). I was fairly excited by this and, as the cook in the family, I was given one of her original cookery books – Miss Leslie’s New Cookery Book, published in 1857. It is a book I treasure and I am now trying some of her recipes. While flicking through William Sitwells’s A History of food in 100 recipes I also discovered that the first known printed recipe for Cupcakes was by Miss Leslie from her book 75 Reciepts for pastrys, cakes and sweetmeats.

I don’t have this book at the moment, but the cupcake recipe is, as I say, in Sitwell’s Book and for my first trial of Miss Leslie’s recipes I have decided to go with this one. So for the next little while I am going to revert to the 1800’s and try to see if Aunt Eliza’s recipes still work today… At the very least I shall have some fun in the kitchen and be quietly smug I had such a lady as an ancestor….

The same of fine brown sugar

The same of fresh butter

One cup of rich milk

Half a cup of powdered allspice and cloves

Half a cup of ginger.

Cut up the butter and warm in the milk

At the same time warm the treacle and stir into the milk, gradually add the sugar and leave to cool.

Beat the eggs and stir into the mixture with the flour, add the ginger and spices and mix well together. The smell here of rich treacle and spices in really amazing.

I buttered muffin tins and baked at 180C for 20 minutes.

The cakes themselves were heavy as I expected them to be (this is a very old recipe!). But they had a glorious taste of winter. The spices coming through were amazing. I had been worried it would be all cloves, but it’s definitely a recipe I will do again, though I may add some baking powder to lighten them just a little. Mini cupcakes with a cup of tea; bliss. Life can’t have been all bad in the 1850s…

Here’s how they came out:

We set up this site 4 months ago and at last I am starting to try and use it properly! So ?Hello! As my website says I am cook/chef. I have always cooked (  with a brief stint as working in a homeless shelter and in a jewellers) it is what I love to do and have been incredibly lucky to have had a lot of fun along the way. I have cooked for the famous and not so famous, I have taught adults and children and I am about to start teaching really little people…. you are never to young learn. If you have young children then have a look www.theburrowfamilyclub.com. It should be  great fun and more than likely a little bit chaotic.

Back to the planning….